Prime Cap Insight: How we work with a Wealth Manager...

Disposal of foreign currency denominated assets and repatriation of a foreign currency lump sum so as to make use of wrappers and structures that better suit your longer term tax, savings and investment objectives is often an exercise that benefits somewhat, if not hugely, from the fractional but meaningful improvements a non-bank broker, like Prime Cap, can offer on rates of exchange, contract types, terms, and transmission, holding & clearing costs.

Many financial services businesses are not wholly 'turned on' to the measurable benefits that can come from working with an a-tuned currency broker; so, let's explore some of the way in which 'we' can be used and some of the bottom and top line enhancements we can bring to the margin ordinarily available to UK and worldwide private client digitally converting and transmitting physical currency...

In the world of private wealth volume is important.

This tends to mean that sundry conversions of currency and movements of capital for fairly mundane things are often overlooked when it comes to competitive treatments.

And yet, with a private client moving funds somewhat often - a retired surgeon living in the south of France who moves £10 - $15k twice a quarter for his living expenses, when annualised the savings on £80,000 and upwards are higher than 1%...which, in a low interest UK environment constitutes a return that many savings facilitators would happily publicise.

So, why then do so few wealth management businesses formally align their brands with specialists in foreign exchange?

Brewin Dolphin for one - they have no 'house partnership' with an FX firm.

Sure, they may be EAMs or Private Banks in their own right, but they don't 'sell' FX advisory as a product other than as part of a diversified or focused investment category. Deliverable currency - the movement of money between accounts - is left by the wayside.

We know that internally these institutions use their prime brokers to convert between nostro accounts.

Their treasury is their own business and, as it happens, most|many enjoy similar margins on their proprietary FX conversions (with turnovers that exceed if not match that of many FX brokers) which closes the door on someone like Prime Cap being able to win their treasury business, but, their clients tend not to have the same arrangements or access.

Referring FX work to someone like Prime Cap not only keeps the client local, but, also limits the opportunity for other financial services players to enter the fray.

Given that we only work with sources we know (so we won't necessarily entertain an approach from a prospective client who doesn't mention a referring name with which we're familiar) our referrers know whom they are referring to and can take confidence from that.

We know we would rather someone we cannot assist being introduced to a trust source who can aide them, than being left to trawl Google to help themselves and we suppose our peers in the wealth management space take the same view.

Although not public material, our marketing team recently sought opinion on a

'HOW IT WORKS' brochure.

The idea was essentially panned because it was concluded that the array of FX matters to which the concepts under analysis might apply was so broad that to try and condense the principles of our approach and our work (the two being equally important to us) would be an exercise in futility; also, we found ourselves getting angry about just how poor the banking sector is - marketing material written in anger is not attractive.

That being said, what do you think? 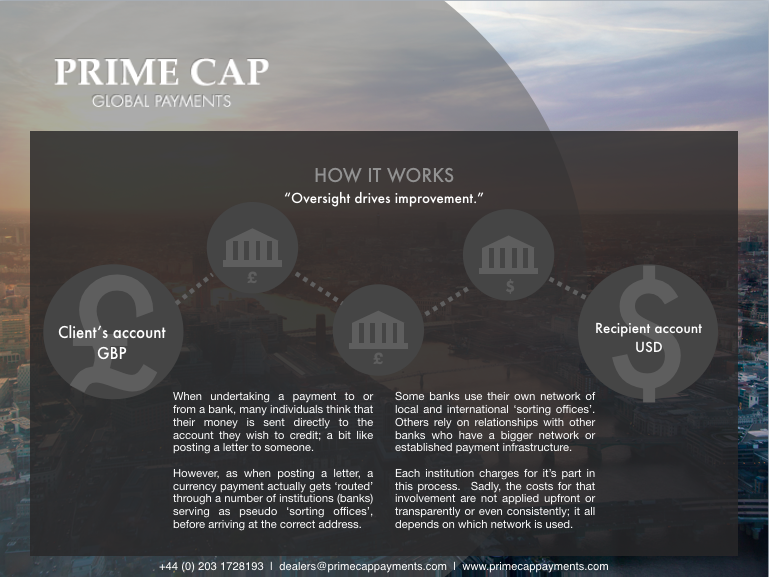 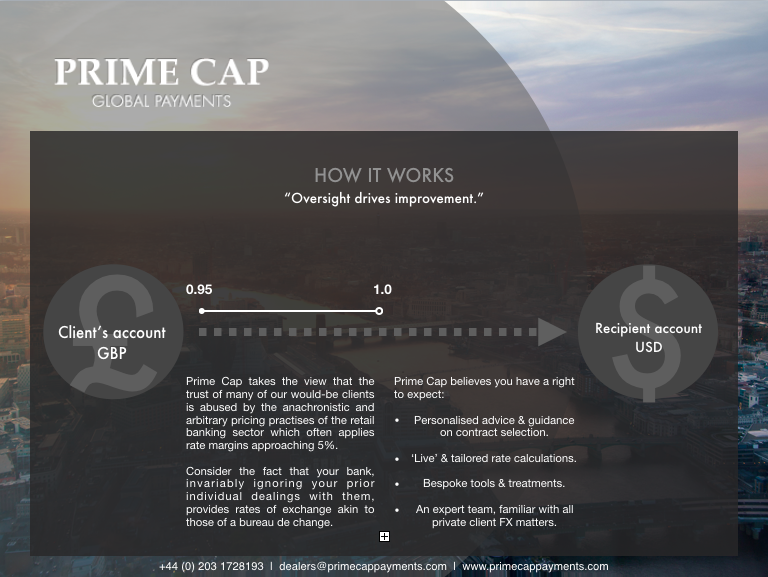 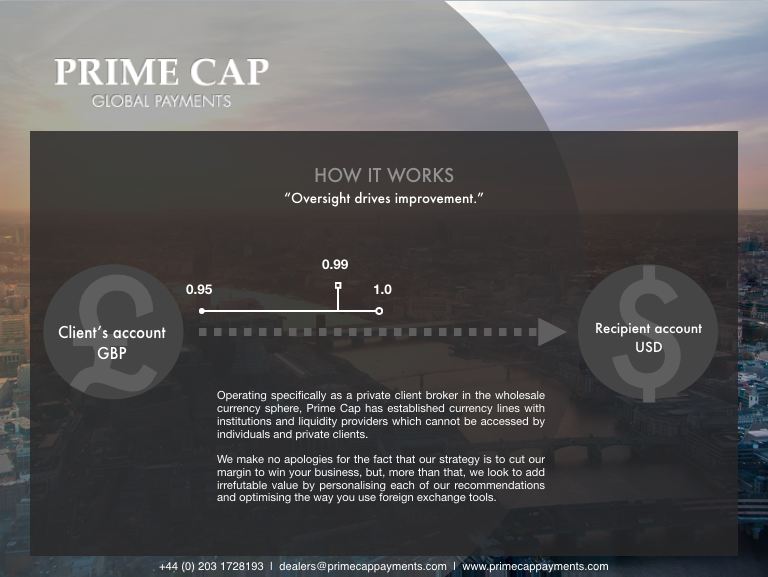 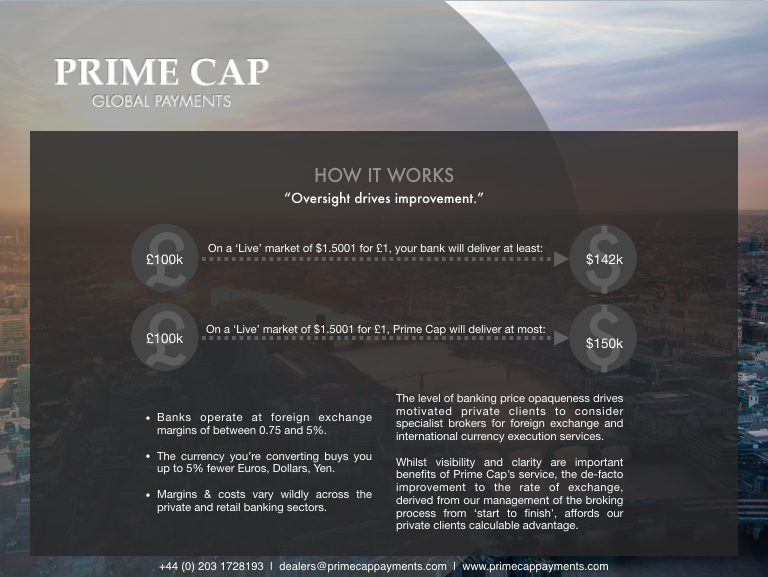 'How it works' tends to be one of the most often coined phrases around the Prime Cap table.

Foreign exchange services such as ours are still relatively, and somewhat incredibly, niche and even those with an understanding of the principles of our operation tend to overlook or even forget to introduce them to clients for whom they could be supremely valuable.

Since the Retail Distribution Review and what was billed as a renaissance for transparency, a number of wealth managers and financial advisers, independent or not, have questioned the ethics behind referring a client for FX services.

Well, if you do not ask for a kick back or a bung, then you are not only compliant with the spirit of the legislation, but you can sleep better because you've done a selfless good deed for your client - how patronising are we!

We find that persistency backed by consistency propagates our networks.

Increasingly those networks include those dealing in the savings, investments, borrowing and lending spaces.

Our goal is to steadfastly pump margin back in to our prices so that those competitors who attempt to scale at the cost of competition for the client reach critical mass and can no longer be called a competitor of us. It's about the long game, you see.

We would be very grateful for your feedback on the above material too.

Private Office Services | What does this mean when it comes to currency?

Working with a foreign buyer? Our involvement from start to finish.

What tends to move the FX markets?